Live with Us
About UsWork With Us 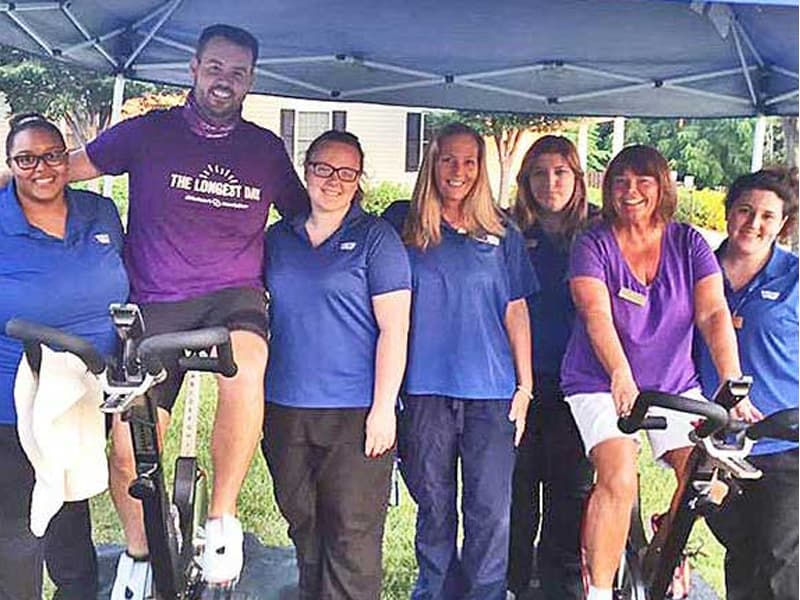 HHHunt Volunteers Pedal For a Cause

Volunteers got to peddle to their hearts’ delight during a stationary bicycle marathon at Spring Arbor of Winchester — an HHHunt residential assisted living and memory care community — to raise awareness of Alzheimer’s and other forms of dementia. Participants, including the center’s administration and staff, pedaled on stationary bicycles outside the facility from 5 a.m. to 8 p.m. on the summer solstice, the longest day of the year.

“He is biking quicker than any of us,” Kniceley said.  People with Alzheimer’s can also suffer from “sundown syndrome,” a psychological phenomenon that produces confusion and restlessness typically at sundown, according to webmd.com. An estimated 20-45% of Alzheimer’s patients will experience some sort of “sundowning” confusion.

Because it’s how you live that matters.

More How You Live Moments

HHHunt’s Human Resources team and managers across the organization have been listening and supporting our team members from a social, emotional, physical and mental perspective as we have all dealt with the pandemic and the social unrest in our communities...

In a time where things are uncertain, your home shouldn’t be. If anything, we have learned just how versatile our homes can be. That is why HHHunt Homes has redefined flex space with our customers in mind. Offered in most home plans, the extra space is perfect for working or learning from home...

Engaged Community Partner | Making a difference with Habitat for Humanity

On July 15th, team members from HHHunt Homes of Richmond and HHHunt Communities volunteered to help with the framing and roofing on a Habitat for Humanity Goochland County (HHG) house. It was a proud moment to be a part of this rewarding initiative for the third year in a row.

HHHunt’s Corporate Marketing Team engaged in a community cleanup project to pick up litter on the public roads around our River Mill master-planned community to keep it clean and beautiful.

After learning of the need for food donations because of the pandemic, team members and residents at Abberly Pointe Apartment Homes in Beaufort, South Carolina, held a food drive in June to benefit HELP of Beaufort.

Pets of all kinds can be found throughout HHHunt’s Apartment Living communities. That’s why supporting the Greenville Human Society was the perfect outreach for Abberly Market Point Apartment Homes.

In May, team members from HHHunt Homes of Hampton Roads volunteered their time to help the Suffolk Humane Society. Volunteers insulated a cat shed, added gravel to the mailbox and organized donations in the in the warehouse.

The Foxridge and Hethwood Apartment Homes recently hosted a food drive to benefit the United Way of Southwest Virginia, Montgomery County. With the help of team members and residents, they collected a huge amount of food to donate.

To help those in need of meals in the Raleigh/Wake County area of North Carolina, HHHunt Homes participated in the Meals on Wheels "March for Meals" campaign...

Abberly Market Point Collects Books For A Cause

Reaching out to assist those in their local community, team members and residents at Abberly Market Point Apartment Homes...

As an engaged community partner, HHHunt Homes of Raleigh participated in the Soldiers’ Angels program this year. Soldiers’ Angels provides gifts, comfort and resources to the military –deployed, wounded, veterans and their families. The Raleigh team adopted two military families for the...

By holding food drives in our communities, we can give nourishment to those in need. In a joint effort between our Corporate offices...

At HHHunt, we promise to be an engaged community partner, and collaboration is one of our core values...

Kudos go out to our Spring Arbor of Greenville and Spring Arbor of Kinston team members for their collaborative effort working together to help paint a Habitat for Humanity House...

HHHunt was honored to partner with the American Heart Association for its second annual Hard Hats with Heart program in Richmond...

In September of 2019, Spring Arbor of Wilson held the Wilson County Walk to De-Feet Dementia and raised over $2,300...

At HHHunt, our vision is to improve the world and how people live, and we believe that giving students the tools they need...

We are proud of our team for donating their time and services for this great cause...

HHHunt Partners with Habitat for Humanity of Goochland County

The Richmond Accounting Team volunteered at Feed More helping to prepare meals for delivery to those in need..

After learning of a local need, the HHHunt Homes of Raleigh team volunteered to provide exterior repair on the Jones family home in North Carolina...

Our Spring Arbor of Greenville community packed 100 lunch bags to carry to the Community Crossroads Center in March...

Team members from our HHHunt Apartment Living communities recently demonstrated their commitment to improving the world and how people live...

HHHunt Corporation held its 4th Annual Food Drive and Matching Food Bank Donation over the months of November and December 2018...

With the collaborative effort of several community partners, over $30,000 was raised for this very worthy cause that collects gifts and warm clothing to children in Spotsylvania Co, VA...

As an engaged community partner, Abberly Grove team members felt very fortunate to volunteer their time at the Shepherd's Table Soup Kitchen as they strive to give back in their community...

Team members from Spring Arbor of Greensboro reached out into their community and encouraged 50 people to register for the Guilford County Walk to End Alzheimer's...

A Day of Caring in the New River Valley

HHHunt team members from the Blacksburg office and Foxridge apartment homes participated in the United Way of the New River Valley’s Annual Day of Caring...

With the support of Anthem and Livongo, team members from HHHunt raised $1,800 in the fight against Diabetes through their participation in the Tour de Cure. It was a collaborative effort of employees from all over the company who cycled, ran and walked their way to the finish line...

Being an engaged community partner is often second nature for HHHunt team members and residents. It’s part of who we are...

HHHunt Participates in Habitat for Humanity’s Home for Good Program

Team members from HHHunt’s Foxridge and Honeywood apartment communities contributed their time and talents to help make a house a home for a deserving family...

Over the month of June, the HHHunt Homes of Richmond team organized a diaper drive to support the Capital Diaper Bank...

On Red Nose Day people all over the world proudly wore red noses to raise awareness and funds to help children in need. The money raised from this event benefits children in the neediest communities in the U.S. and across the globe...

After months of preparation, team members from HHHunt’s Spring Arbor of Kinston arrived early at Fairfield Park to prepare for the 2018 Lenoir County Memory Walk...

Spring Arbor of Greensboro is Delivering Meals on Wheels

Team members and residents from Spring Arbor of Greensboro have partnered with Senior Resources of Guilford Countyto deliver meals to seniors once a month...

Living Our Vision Through Habitat for Humanity

A vision statement is just that until it’s put into action. Click here to experience the difference HHHunt has made in the life of the Ragsdale family...

Once again, HHHunt has partnered with Safe Harbor to renovate and provide improvements to one of their properties...

Weaving Sleeping Mats for the Homeless

The project takes ordinary plastic grocery bags and turns them into sleeping mats and tote bags for the homeless...

The Spring Arbor of Salisbury team, along with residents and family members, recently collected gently used coats for the "Coats for Kids" campaign...

Spring Arbor of Greenville wanted to make a difference in their community. Activity Director, Courtney Wynne, reached out to the Community Crossroads Center...

Walden Pond is Helping the Homeless in Lynchburg, Virginia

The Henrico Education Foundation reached out to HHHunt to provide supplies to a local area school. Employees in the HHHunt Richmond offices were more than eager to help...

HHHunt Donates to Reach Out and Read

HHHunt recently learned about Reach Out and Read - a program that incorporates books into pediatric care and encourages families to read aloud together...

Employees from HHHunt's Richmond office partnered with the Chickahominy Y, located in Hanover County, VA, to volunteer for the Bright Beginnings program...

HHHunt's vision is to improve the world and how people live - and our Raleigh office is committed to making that happen in their community...

Team members at Spring Arbor of Greensboro recently planned and hosted their first ever "Forget Me Not 5k - Planting Seeds of Hope for a Cure" event...

Employees from the HHHunt Blacksburg Office and Foxridge and Pebble Creek apartment communities joined together for the "Color Me Cameron" 5th Annual 5k Color Walk/Run...

Every month, residents of Spring Arbor of Richmond gather to prepare 100 peanut butter and jelly sandwiches for the Richmond Area homeless...

The event raised over $500,000 making it the most successful chili-cook off ever for the Charleston Animal Society...

Employees, residents and family members of Spring Arbor of Apex held a yard and bake sale to raise money for Alzheimer's...

Spring Arbor employees are dedicated to providing compassionate care to all of our residents. That is why we are so excited about the Baby Joy program...

Employees at Spring Arbor of Severna Park participated in the Walk to End Alzheimer's and raised over $1,400...

Four employees from Auston Grove Apartment Homes in Raleigh, North Carolina ran in the Raleigh LUNGe Forward 5k Run to support one of their residents who is battling lung cancer...

Employees from Abberly at West Ashley in Charleston, South Carolina found a great way to help our soldiers by donating items to Operation Shoebox...

HHHunt Volunteers Pedal For a Cause

Volunteers got to peddle to their hearts’ delight during a stationary bicycle marathon at Spring Arbor of Winchester — an HHHunt residential assisted living and memory care community — to raise awareness of Alzheimer’s and other forms of dementia...

Employees in the HHHunt Raleigh office partnered with Inter-Faith Food Shuttle of Raleigh and volunteered at their Tryon Teaching Farm...

An employee’s home state of West Virginia was hit with major flooding. Thousands of people were displaced as rivers rose quickly and flooded complete towns. HHHunt rose to the occasion...

ust about every one of us in the HHHunt organization has been affected by cancer, whether it be the loss of a family member or close friend, someone we know who is currently battling cancer, or even the caretaker of someone fighting this terrible disease...

Our vision is to improve the world and how people live by creating meaningful experiences and places of great distinction. That means giving back to the communities where we develop...

HHHunt helps lift up those less fortunate whenever and wherever possible. Recent examples of our commitment to community are our patnerships with Habitat for Humanity...

Full Story →
Load More
Because it's how you live that matters®